In the UK, we have a number of far right organisations, all of whom claim to be working for the good of ordinary people but whom instead work towards more sinister agenda.  They all now have facebook accounts, which are a great source of hilarity for anyone who enjoys watching people make utter dicks of themselves.  However, the rise of one in particular has annoyed me (bear with me here, this post is kind of funny) …

It annoys me because it operates under the guise of a legitimate political party (it’s entitled to do that) and it’s page is littered with anti-Muslim cant (they are allowed their opinion) but it also specialises in three things:

(ii) non-political populist posts which people share because good decent people are also concerned about animals, the environment etc and sharing them makes them feel like good, decent people

(iii) mob thinking of the worst kind, where anyone who goes onto their page to ask the veracity of a post, or their sources, challenges them in anyway, no matter how politely, has their post removed and are then blocked and they all gather courage by egging each other on.

After spending several weeks pointing out to facebook friends (a) the error of some of the posts; (b) the latent and not-so-latent bigotry in others and (c) asking them not to continue to give these idiots support by sharing their posts, the wine and my temper got the better of me last week and I thought I would spell out in very simple terms why supporting them was not a good idea:

Okay, I’m going to take a deep friggin breath here and ask one LAST and FINAL time for certain of my friends on facebook to stop sharing posts from Britain First. I am sure you are doing it without realising what a bunch of racist, homophobic twunts they are but every time you share one of their pictures you are helping them spread their message of hate.

(i) Their stories are ALL fake or slanted in such a way to promote race division and hate and aimed particularly at Muslim people. UNLESS YOU WANT PEOPLE TO THINK YOU SHARE FAKE STORIES TO FOMENT RACIAL HATRED, DON’T SHARE THEIR POSTS.

(ii) They hate gay people so IF YOU ARE GAY/ LOVE SOMEONE WHO IS GAY OR SIMPLY DON’T WANT TO APPEAR HOMOPHOBIC, DON’T SHARE THEIR POSTS

(iii) The leader of Britain First is a guy called Paul Golding who has been arrested because of a stunt they pulled, walking into mosques, smoking, with shoes on, waving bibles about – if Muslims did that to Christians in church on a Sunday, all hell would break loose, so please don’t think their attempts to cause a riot are just a jolly jape. IF YOU THINK THE DESECRATION OF SOMEONE’S SACRED SPACE IS HIGHLY OBJECTIONABLE, DON’T SHARE THEIR POSTS.

(iv) Paul Golding is the worst type of far right Christian – someone who thinks only his view is acceptable – he is anti-women’s reproductive rights,
so IF YOU ARE A WOMAN, DON’T SHARE THEIR POSTS. He and his organisation are trying to ensure that no-one has religious freedom in the UK so IF YOU ARE A PAGAN, OR HINDU, OR BUDDHIST OR ATHEIST OR ANY OTHER RELIGION APART FROM FAR RIGHT CHRISTIAN, DON’T SHARE THEIR POSTS.

(v) Their page is littered with their supporters referring to Muslims as “scum”, “things”, “creatures”, “sand rats” etc. IF YOU THINK THIS IS ATROCIOUS, DON’T SHARE THEIR POSTS.

(vi) They don’t give a toss about millions of animals being harmed and murdered in our abbatoirs every day, but are quite happy to highlight a particular type of animal murder to justify their own right wing political agenda. IF YOU CARE AT ALL FOR ANIMALS, DON’T SHARE THEIR POSTS.

I really don’t want to start deleting people who I care for so please, please, stop propagating this shite.

I put the settings on public because I suspected that a few of my friends would want to share it.

I then went offline to give them not a single moment’s more thought that night and the next day woke up to a bit of mayhem.

My post was shared – it was shared so widely that someone thought it was a good idea to let Britain First know about it.  Now – bear in mind whilst I keep an eye on the page I have never gone on there to tell them they are idiots, I’ve not engaged with them, threatened them, done anything really to upset them apart from disagree with them fundamentally and explain to my friends why I thought they were such an objectionable bunch.

A number of people I didn’t know from Adam were kind enough to message me and let me know that their supporters were going nuts.  Apparently, amongst the comments were “Muzzie cunt”, “paki bitch”, “skeet” etc, as well as several offers from brave little keyboard warriors to despatch me “back to Allah”.  Not sure what Allah (swt) has done to deserve little old Pagan me, but I disgress …

Unfortunately, I couldn’t see the page from my aged phone and being away from the laptop meant I couldn’t screengrab even if I could.

By the time I got home, to their credit, Britain First had deleted most of the worst and within an hour, the whole post was gone.

I did however have this lovely little missive waiting for me: 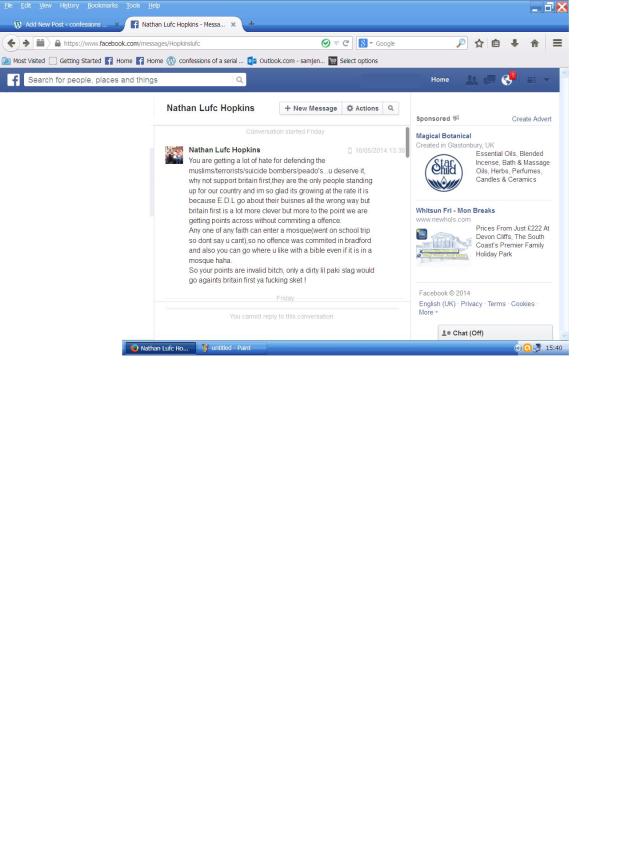 I think I don’t need to say much more to illustrate the point that Britain First is an organisation who is racist, homophobic and intolerant.  Mr Nathan Lufc Hopkins did that for me, perfectly.

After I told him where to go and what to do, in language he would understand, a short conversation ensued where I attempted to educate him on the dangers of making wrong assumptions; explained why his view that I was a “paki slag”, a “bitch”, a “skeet” etc was contrary to Britain First’s apparent dedication to the freedom of women oppressed everywhere; why his behaviour was poor manners as well as really not a good idea; finally ending on trying to explain what the Malicious Communications Act, 1988 was all about and how he was therefore guilty of an offence under said act.

He then ran away and blocked me.

By this point, Mr Nathan Lufc Hopkins had made a series of tactical errors.  Firstly, he has a partially open facebook page.  That gave me his hometown.  Secondly, he is registered to vote.  That gave me his parent’s address.  Thirdly, he has clearly never met anyone who has set up two facebook accounts, one of which he doesn’t know about. Blocking people doesn’t stop them looking at your partially open page if they really want to do so.

Further, Mr Hopkins suffers from several delusions – firstly, that he is in some way superior to other people, such superiority giving him the right to send abusive, racist messages to people he doesn’t know.

Secondly, that doing so is not against the law and in fact is a perfectly acceptable thing to do to someone who holds a different opinion to you, including someone who has never engaged you in reasoned debate or otherwise tried to change your view.

Thirdly, that he has the right to free speech, without any consequences.

Finally, that facebook gives you some anonymity – that you can have stupid photos of you drinking, pulling faces, racially aggravated posts etc on your wall without anyone who doesn’t agree with you knowing about it.  Well, you can but you need to invoke your privacy settings in order to do so.

Just before he terminated our conversation I tried to convince him that continuing to throw racially-motivated abuse at someone he didn’t know was a bad idea, as you never know who people are on the net.  I offered him the opportunity to apologise.  He laughed, saying that if I knew the law I wouldn’t be talking to him, I’d be doing something about it.  He then called me Judge Judy and ran away.

There were several ways in which I could have responded to Mr Hopkins and over the last few days, I have considered them.  I have to admit to finding myself feeling a teensy bit sorry for someone who is so socially inadequate that they believe its acceptable to behave in this manner and who continues to behave in aggressive and abusive ways despite being told that it is unacceptable.

It is the voice of a bully, someone who hasn’t got where he wants to be or has become who he wants to be because he is too busy being nasty to other people and blaming them for his own shortcomings, rather than trying to improve himself.

Whilst such people are to be pitied, they do unfortunately have a horrible habit of making other people’s lives miserable and I felt compelled to do something about that.

I was torn between going to the police and ensuring that he ended up in court for said racially-motivated malicious communications (argument with self: does someone so inadequate need to have more stacked against him?); or sending him his address (argument with self: too aggressive and might frighten the poor twunt) or a host of other things (manure delivery was amongst them).  Had he done similar before?  I was pretty convinced he had.  Did he need to be taught a lesson?  Yes he did.

In the end I settled for a blogpost.  Congratulations Mr Nathan Lufc Hopkins, formerly of Batley, now living on the outskirts of Leeds, you’re on the net.

I’d appreciate it if my lovely readers made this bully famous.

Writer, blogger, animal activist, people activist, dream-catcher maker, mommy to 9 cats and a roving band of foxes ... Blog name comes from my father's suggestion for the title of my autobiography ... after my mother's and my awful habit of flashing whenever the security police took our photo in the dark old days of apartheid South Africa. I love nature, including creepy crawlies and people, find life fascinating and frustrating and have two terrible weaknesses - nictotine and animals in distress ... can't abide the latter situation and can't give up the former. I'm Pagan but not anti-Christian, funny but quite serious, light-hearted but can be annoying. I am warm-hearted until someone p*sses on me too much, then I get soggy and even. Feel free to link me but all the words on these pages is copyrighted, so copy it and take the credit and I will find you and slap you upside the head, hard. The blog is probably best read via category as there is loads on here already, and I just got started :-)
View all posts by titflasher →
This entry was posted in Uncategorized. Bookmark the permalink.